On the Record • January 23, 2019 • https://ontherecordmag.com/2171/reviews/jack-harlow-a-review-of-his-dec-29-performance-at-mercury-ballroom/

Jack Harlow – A review of his Dec. 29 performance at Mercury Ballroom 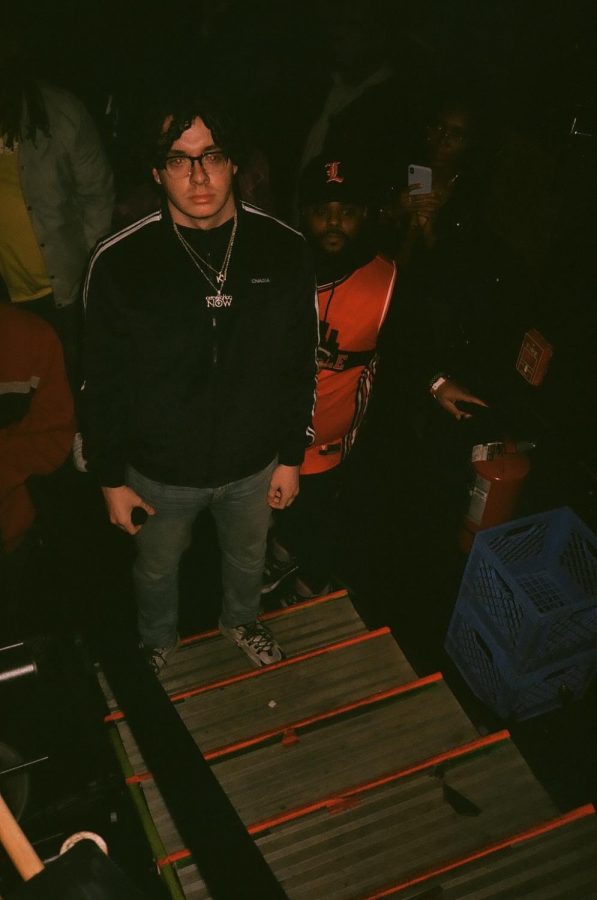 Jack Harlow at his Dec. 29 show at Mercury Ballroom. Photo by Urban Wyatt

We were shivering outside of the Mercury Ballroom as hundreds of Louisville teens wrapped around the building, puffing clouds of warm breath in the frigid air. Everybody huddled close and talked to people they had never met, telling jokes or just making quick conversation to pass the time. It was rarely quiet. I talked with the people behind me about how they felt old because they were some of the only people that had graduated high school they had seen in the line. The crowd began to get louder and antsier as the opening time neared. Once the doors were opened, I realized that my backpack wasn’t allowed in the ballroom so I made a mad dash for my car many blocks away. My brain began to flood with worry about missing the concert. What if I lose my spot? What if they close the doors? Once I put my bag in my car, I did the frantic run in the painful cold once again. I ignored all the frowns and worried looks random pedestrians made as I quickly navigated my way back to the concert. Luckily the line was long enough that by the time I sprinted back, I was able to get my spot back. Finally, we were allowed in, the atmosphere bursting with anticipation and excitement as chatter filled the room. The Mercury Ballroom seemed like it wouldn’t hold everyone; it was flooded with people until almost no more could fit. There were hundreds of teenagers in every direction, even lined up on the balcony.

We started the anxious waiting game again that can be expected with any concert as we waited for the show to start. The smell of pretzels and hotdogs made me search for something to eat, but there was no use going through the endless sea of teenagers pouring into the room. I just stayed put and ignored the traditional concession stand food smell that wrapped around the ballroom. I studied the hundreds of faces, trying to see if I recognized any. Most people were wearing the urban clothes expected at a scene like this. Baggy hoodies, jean jackets, ripped jeans, and popular name brand shoes were the most common, but the audience was from all over town and their clothes were unique accordingly. This wild scavenger hunt to recognize people went on to no avail until I spotted a friend in the back corner half an hour later. I found myself constantly checking my phone or scanning the stage and balcony, hoping to catch a glimpse of Harlow. Anytime I saw someone moving on the stage, a wave of excitement would rush through me, only to be slightly disappointed that it was a technician. This same behavior was almost universal across everyone in the room as dozens of phone screens would illuminate excited faces sporadically.

The silence was broken by popular hip hop and rap music that blasted throughout the ballroom. People began nodding their heads up and down to the beat. Eventually a DJ came out and got the crowd even more excited with some popular songs by Travis Scott, Migos, and Drake. Finally, the first opening act, a 17-year-old Louisvillian, Bblasian — his rap name — came onto the stage. The crowd erupted with excitement. Partly because some were fans of Bblasian, and partly because some were just glad the show was starting. Bblasian’s bubbly and energetic personality only fueled the excitement. His performance effortlessly invoked jumping, arm swaying, head swinging, and smiles. Everyone felt connected to him because he was the same age as majority of the people in the crowd. We loved him, and he performed a new song that had never been played before, which only fueled the excitement. It was a very cool and exclusive experience to hear. I felt as if I was listening to something intended specifically for me and all the other teens to hear.

When he left, The Homies came out. Fewer people knew who they were, but the crowd still gave the mandatory excited scream when they appeared. The Homies are a five-person rap/hip hop group from Louisville that frequently collaborates with Jack Harlow. As time passed and The Homies performed many, many songs, the crowd became less interested. The swinging hands and bobbing heads turned to hands in pockets and slight swaying. The Homies performed for what seemed like two hours — maybe it was —it was hard to keep track of time. Some parts of the concert seemed to last forever, while others seemed to end almost as soon as they started. It was easy to forget to check the time and suddenly it was hours later, or just as easy to check every ten minutes in hopes that Harlow would be out soon, depending on your opinion of the artists. For me, I was ready for the next act.

It’s not that The Homies sounded bad, they just went on for too long when it was a concert meant for Jack Harlow. The autotune made the whole group sound the same, and all the songs seemed to blend together. The people in the back were completely lifeless and not even dancing, while groups in the front still tried to keep the vibe alive by dancing spastically, which came off as obnoxious to some who just rolled their eyes and talked amongst friends. All the crowd surfs and beat drops couldn’t change the fact that the crowd wanted Jack Harlow. This might have made Jack’s entrance even more explosive.

The second he appeared, screams filled the room, the kind of noise that made your teeth vibrate. This was quite literally the moment everyone had been waiting for. As he performed the crowd sang along to every word. Harlow was energetic and confident, and the whole room loved him, even the adults that previously seemed unfazed. He performed for longer than the opening acts, obviously, but it didn’t seem that way. Time seemed to fly from one song to the next. Just as fast as a song had started, it had ended, with the ending blending with the beginning of the next song as Harlow took us on wild ride composed of his choice of loud, electrifying music. He mainly played his new songs, but also performed some of his iconic ones from the beginning of his career that the crowd went crazy for. Just when the audience began to get worried the show would end, Harlow would start another crowd favorite. From “Sundown” to “Routine”, the crowd ate it up. Not only was the music catchy and full of life, but Harlow knew just how to work the crowd. He combined the perfect amount of singing, dancing, and audience participation. It was obvious his sound wasn’t just from editing in a studio. Harlow was full of talent and charisma. Some of the best parts were when he let the crowd sing along, and his hometown proved that they really listened to his music. After a very long and electric performance, Jack performed one last song, and thanked us all for sticking with him. The crowd left happy and Harlow’s energy stuck with them. The cold street outside the venue was filled with the rapid chatter of teenagers talking about how good the concert was, how they wished Harlow played one of his hit songs; Ice Cream, or how some had fun but were just ready to sleep.

The Jack Harlow concert highlighted the uniqueness of Louisville’s music scene. It also showed how important it is to the youth of Louisville. Harlow is a perfect example of a music figure from Louisville that brings youth from all schools together. We were united by our love for Harlow, dancing together with other kids we had never met. This was one of the biggest social events in all of Louisville, and it did not disappoint. The performance was easily worth the $60 price of admission, which was very affordable to the audience mainly composed of people who may not have jobs. While some of the warm up act may have dragged on for too long, the Louisville artists all showcased great talent and what it means to be a rap artist in the 502. Jack Harlow is not only a great artist, but a great performer who pays excellent homage to his hometown. I would highly recommend attending a Harlow concert, but especially if you live in Louisville.