On the Record • February 5, 2020 • https://ontherecordmag.com/3344/top-stories/once-on-this-island-at-actors-theatre-review/

Once On This Island At Actors Theatre — Review 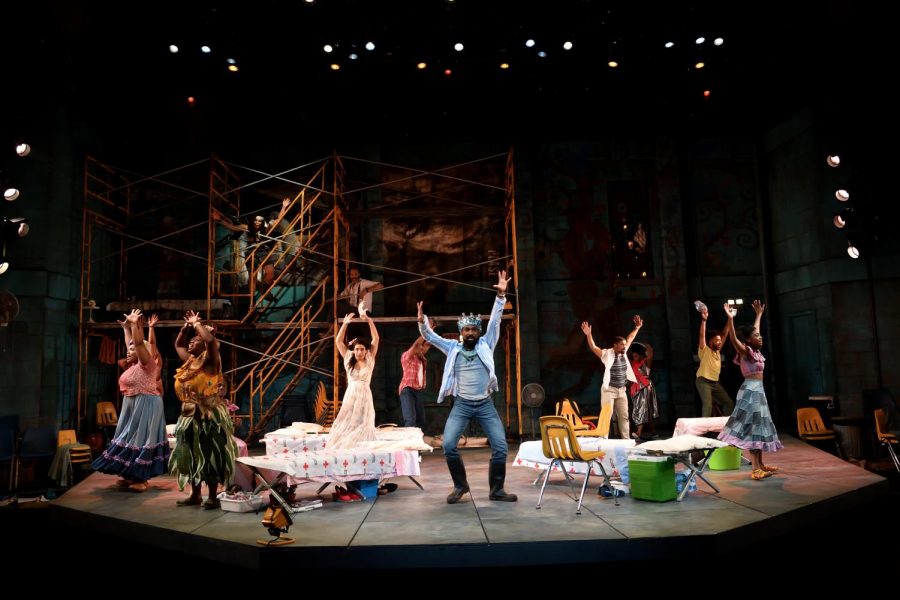 Actors Theatre’s production of the musical “Once On This Island,” showing Jan. 29 through Feb. 23 in the Pamela Brown Auditorium, is a beautiful, touching show about the power of love. Ticket information can be found on Actors Theatre’s website, starting at $35.

Set in the French Carribean, it tells the story of Ti Moune (Lauren Chanel), a poor peasant girl, who falls in love with a rich boy, Daniel Beauxhomme (Colin D. Carswell). After a devastating car accident, Ti Moune nurses Daniel back to health until he is taken back to the pleasantries and luxuries of his wealthy world.

Desperate to see him again, Ti Moune asks for help from the gods who rule the island on her journey to Daniel’s side. In a fun bet, the demon of death, Papa Ge (Soara-Joye Ross), and the goddess of love, Erzulie (Gisela Adisa), try to see if love or death is stronger. The mother of earth, Asaka (Bre Jackson), and god of water, Agwe (Allan K. Washington), guide her back to Daniel.

After the two reunite, Ti Moune discovers that Daniel is engaged to Andrea (Alexis Louise Young), another member of his high society, and she makes the lovestruck decision to trade her own life for his.

Chanel and Carswell brought a light and soft portrayal of their characters, a lovely antithesis to the bold and colorful immortal gods the islanders praise. Both of the lead actors’ voices were elegant and complemented each other nicely.

The standout moment of the show, however, came in the song “Mama Will Provide” when Jackson showcased her wide range of vocal talent. The rather humble audience lit up with applause as she belted Asaka’s famous notes.

Director and choreographer Robert Barry Fleming staged a perfect ensemble, known as “the storytellers” in the production. Through deeply synchronized dance all throughout the show, it was clear that this tale had big cultural importance within the islander community.

The dynamic movement and vocalization in the show was quite different from Actors’ regular plays that we’ve come to know and love, opening a fresh new door for those who are new to enjoying theatre. This production is a wonderful start to Fleming’s new role as Actors Theatre’s Executive Artistic Director, showing promise for the future of the Louisville theatre scene.

Unlike the 2017 Broadway revival, this show was not in the round. Instead, a collection of cots with scaffolding behind it was on a traditional stage, which was used to emphasize beats in various dances. The rustic set gave the show a sharp look and helped emphasize that this is a story about a story being told, rather than just a fairytale — as the Broadway production depicted.

This did, however, make the stage feel cramped at times. Some characters rarely left a specific area of the stage. Papa Ge was often isolated to the rafters, which made her seem a lot more distant to Ti Moune. Nonetheless, the space never challenged the actors’ abilities.

Although the show seems like it’s about a foreign place, the themes of imperialism and social inequity are very relevant to what students are learning about in our history classes right now. It’s a cool new way to be immersed with something that might seem boring in textbooks.

Seeing “Once On This Island” is a charming way to spend an evening with your friends and you will leave the theatre bouncing along to a Caribbean beat.