On the Record • March 5, 2021 • https://ontherecordmag.com/4272/opinion/opinion-louisville-needs-to-put-an-end-to-homeless-camp-removals/ 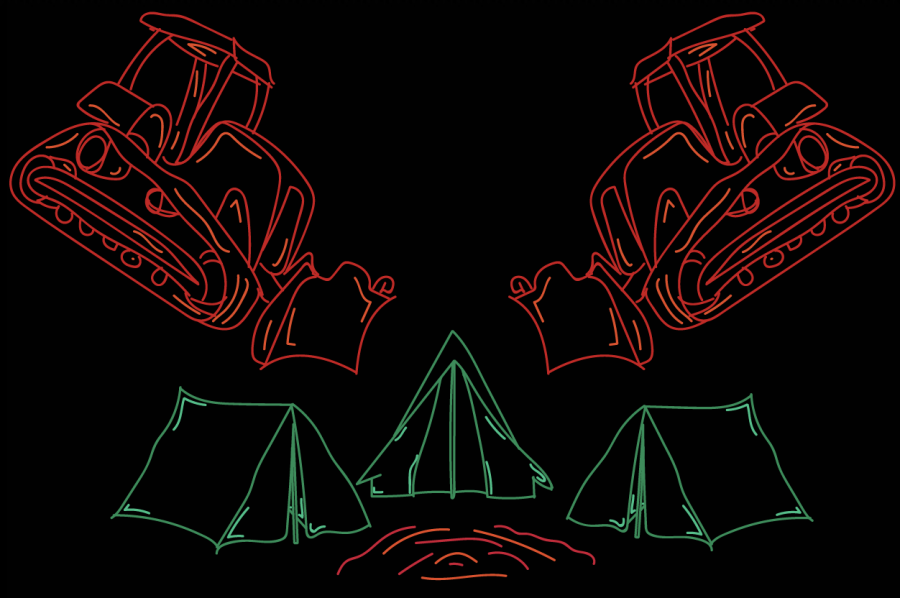 Since kindergarten, I’ve ridden the bus to and from school every day. On those long journeys down the freeway, I would read a book or attempt to take a nap without accidentally bashing my head against the metal divider on the window. Mostly, though, I spent my time peering out the glass at the sights zooming by.

Most of what I saw was nothing out of the ordinary: the towering billboards along Gene Snyder, the fairgrounds that sat empty besides those two weekends in August, and the Smyrna Road exit sign that led us back home were all things that I had looked at over and over again on those morning and afternoon trips. The only thing that ever seemed to really catch my eye were the tents that sat right next to the road, huddled together like a makeshift campsite. There were only a few, and they were placed side by side next to one another. In front there were sleeping bags, plastic containers, occasionally a bike or two, and other items of the sort.

In elementary school, my ignorance of the world and our community led me to believe that these campsites were just that. I didn’t understand the gravity of someone living in a tent on the side of the road, as I rode home to my warm house everyday.

When I entered middle school and finally understood that these places weren’t some urban getaway, but rather refuges for those in our city who were experiencing homelessness, I began to pay even more attention. There seemed to be a pattern with the camps. They would sit in their same spots for a while, until one day I would look out the window and they would suddenly be gone — nothing left but trash and remnants of the belongings of those who lived there. There was an uptick in this pattern around April each year. As our city geared up for the month of festivities that led up to Derby day, the “beautification” of the areas downtown would begin to unfold: new flowers planted and colorful signs that advertised the upcoming events, but also bulldozers and dumpsters that attempted to remove any trace of a houseless population in Louisville.

All this to say, it was no surprise about the event that transpired this past month on Market and Hancock Street.

For those who do not know, on Feb. 19, a homeless camp was cleared by metro garbage crews following orders by the Louisville Metro Police Department (LMPD). The clearing led to at least seven people being displaced from their shelters as temperatures sat around subfreezing numbers. While others in our city might have been worried about how we were going to get the frost off their car windows in the morning, this group of houseless individuals were faced with finding somewhere to take cover from the piercing cold and figuring out how to replace the resources they needed to survive that had been destroyed. The city plowed off these individuals’ possessions as if they were a pile of snow.

The LMPD apologized, later stating that the clearing was a mistake that came about as a result of a miscommunication. They also claimed that they were going to replace the resources — many of which being food, blankets, and other necessities — that had been destroyed. Despite this, Donny Greene, founder of the organization Feed Louisville which provides meals to the houseless and food insecure neighborhoods, said otherwise.

These actions are especially egregious when considering the conditions under which they took place. Although a shelter removal such as this during any season is unacceptable, it is absurd that this occurred during the coldest week we had so far this year.

An annual report from the Coalition for the Homeless released in Jan. 2020 found that 139 individuals were sleeping on the streets in dangerously low temperatures. Although the report could not be completed this year due to COVID-19 related safety concerns, it is safe to assume that this number has increased in recent months due to the financial stresses caused by the pandemic. The removal of protective resources for this group was an action that could have been fatal.

Currently, there are measures in place that are supposed to prevent something like this from happening. In 2017, the Metro Council enacted an ordinance that specifically addressed this issue by stating that a notification and chance for due process must be given to Louisvillians before any camp is set to be cleared. This specifically means providing a three week notice before a clearing and setting out a notice for where those who were living there can retrieve their items that have been removed. Despite this, the clearing that happened recently came after no warning, exacerbating the impacts that were had.

In order to take the preventative steps to stop this from happening again in the future, calls are being made by the Coalition for the Homeless and council members such as Jecorey Arthur to address the problems that gave way for this situation. These calls specifically urge that the following amendments be made to the Homeless Protection Ordinance: remove any loopholes leading to clearings without notice, add penalties for breaking the ordinance, and codify responsibilities of the city departments involved with clearings.

Louisville has had a long history of negligence towards our houseless population. The removal of shelters that provide even a bit of a sense of safety is cruel and inexcusable. While we must commit to expanding the availability of resources such as affordable housing that will aid in lessening the extent of homelessness overall in our community, in the meantime, I support the amendments that are being proposed to prevent any further clearings of this nature. I urge you to contact our local council members to pressure them to push these amendments forward and investigate the violation of this ordinance. A template provided by the Coalition for the Homeless to use to send an email to your council member about this situation can be found here.