On the Record • March 25, 2021 • https://ontherecordmag.com/4299/culture/haunted-history-exploring-scary-sites-around-louisville/ 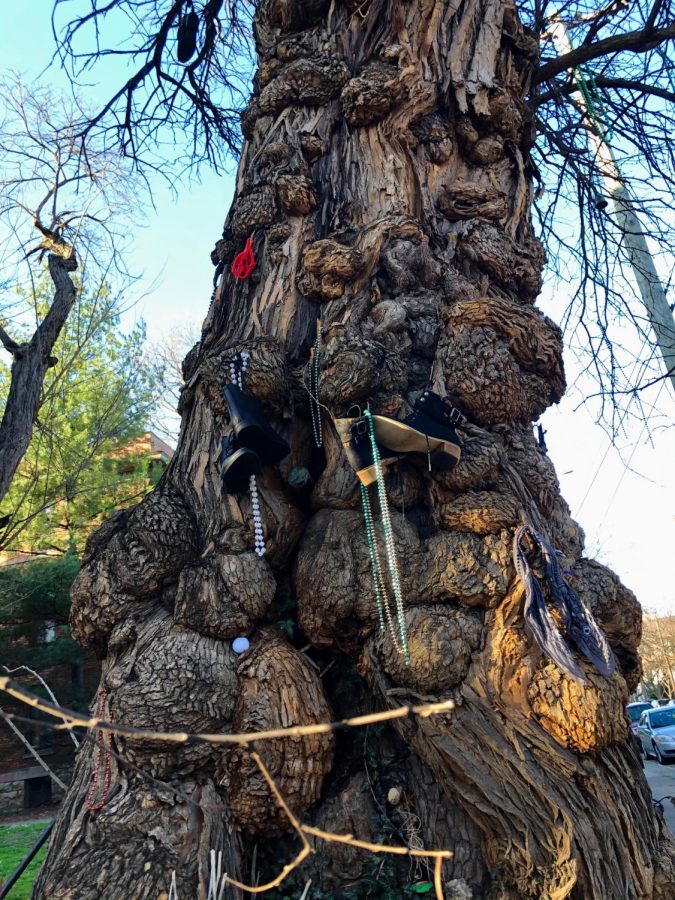 The trunk of the Witches Tree. photo by Gretchen Cummings

eToday I visited two of Louisville’s most well known haunted sites. The dark history that lies beneath these places within our city will open your eyes up to an entire new world, one you may have never thought could exist. From the haunting history of the “Witches Tree” to the legend of the deadly “Hot-Rod Haven,”these sites will without a  doubt be a good way to turn a nice night into a creepy adventure.

The first site I visited, called the Witches Tree, was located at the corner of Sixth and Park Ave, in Old Louisville. The maple tree is tall and wide, with wart-like bumps filling up its trunk. At the top of the tree, its branches reach far as if they had frozen right in the middle of grabbing something… or maybe someone. Along the trunk, items placed by passersby and continuous visitors decorate the tree’s body. When visiting, it’s almost like visiting a friend. It has developed over time a personality of its own, leaving its atmosphere kind and welcoming; contrary to its history.

Originally the Witches Tree was a safe place of gathering for a Kentucky coven of witches. They’d gather at night fall and conjure up spells and create new potions. It was important to these witches to keep the tree sacred and protected; a promise they made to it many years before. But, with the approach of the May Day Celebration of 1889, an annual festival that occurs on May 1 that represents the “resurrection” of nature after the winter months. This safe place to practice magic was no longer. Mr. Mengel, a famous lumber merchant at the time, announced that the tree would be cut down for the upcoming celebration. This was a threat to the coven, which enraged them. In the form of a written anthem, the witches warned the city of Louisville and Mr. Mengel to not destroy their beloved tree:

This tree shall stand and not be cut,

We’ve fed her with our laughter.

Our leafy haven you’ll not gut.

Or pay forever after.

But if you, Wooden King, prevail,

The force of Fate shall strike this town

And right between the eyes.

If our tree falls, yes, Fate will call

To teach you, heartless Dunce,

That all man’s work can disappear.

, the town did not listen to the witches’ threat, and cut down the maple tree. The legend says a loud shriek was let loose and the witches ran. Everyone forgot about them and their threats, so the celebration continued on. But then eleven months later, March 28, 1890, one of Louisville’s most deadly tornadoes was said to be brought to life by the coven, as an act of revenge. This disaster wiped out almost half of Louisville and, in its wrath, killed many in its path, including two members of the Mengel family. It is said, according to witnesses, that during the storm a bolt of lightning struck the remaining part of the maple tree, and a new one instantly appeared. From this day on, the witches gather every night underneath their new haven, and sometimes if you’re careful enough you might catch a glimpse of them.

While visiting the tree, I felt oddly cold, even though the sun was shining directly onto me and I was wearing a thick sweater. While underneath, almost touching the trunk of the tree, I became warm as though the tree was hugging me or shielding me from the cold surroundings. My whole experience was confusing, but attention grabbing at the same time. I didn’t feel like I was visiting just some random tree, but it felt more like an old friend, only when I got close though. As I stepped back, it seemed like I was near a stranger. The coldness of the distance between us was just like the silence or unknowing when you are near someone you’ve never met.

The long stretch of Mitchell Hill road, located in Fairdale, holds a history of devastation and sorrow. The road is known to teenagers within the Fairdale community as “Hot-Rod Haven,” home to death and racing. Between the ‘40s and the ‘70s, this road was a place that represented the recklessness of unaware teens and the fear within parents. Late at night, groups of local teenagers and young adults would gather at the top of the hill, right next to the Mitchell Cemetery, and participate in dangerous races to prove their bravery and social status.  Over the years though, the twisty and steep road has claimed the lives of more than 25 people, bringing an end to the races of death. Many believe this to be the cause of the undoubtedly dangerous route that starts at the top of the giant hill and ends abruptly going into a sharp left turn. But many others believe this road is cursed, and it all started with the tragedy of a couple on their way to prom.

The legend goes, on a cold and ashy night a young couple on the way to their high school prom was heading down the hill. As they were approaching the end, where the sharp left turn appeared, the male driver lost control and they crashed. It is said by many locals and families who live near the cemetery at the top of the hill that they see the young girl roaming the graves looking for her lost date. Many speculate that this ghost story rings true, because on the night of September 23, 1946 Roy Clarke and Sarah Mitchell encountered the same deadly fate. It’s widely believed within the community that Sarah Mitchell is the dead girl who roams the cemetery because a grave with her name on it lies within its grounds, as well as the name of the cemetery belongs to a Mitchell family. Is Sarah Mitchell the dead girl who roams the graves? That’s what I was hoping to discover.

As I was driving up the curvy road, the view was beautiful, the sun was setting perfectly on the horizon and I felt so peaceful. But, as I reached the top of the hill, where Sarah is said to be buried, that peacefulness disappeared completely. I was overwhelmed with sadness, maybe because of the story about the couple, or maybe because I could feel Sarah’s sadness too. I visited this sight with my boyfriend, and the only thing I felt was sadness. I noticed a complete change in his demeanor as well. He seemed nervous and he had goosebumps all up and down his arms. Were we just scared? Or could we feel her spirit? Check it out for yourself, maybe you’ll be the next to be up close and personal with Sarah.