The Culture That Kills Us

Trying to navigate life is challenging enough by itself, but when children are faced with the overarching pressures of diet culture, things become even harder. 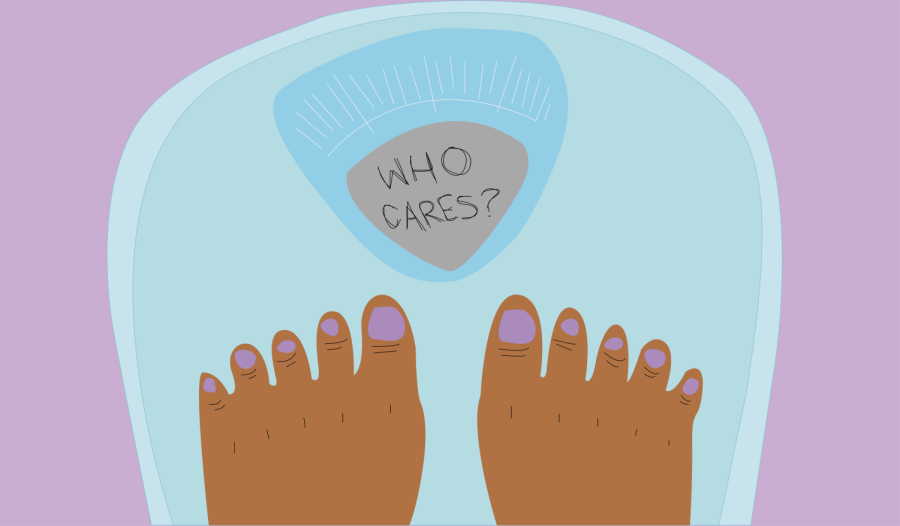 A little girl sits in the backseat of her father’s car, staring out the window to the city she calls home. As the crumbs from her little brother’s goldfish fall between the seats, her fingers grasp her abdomen. The billboards blur together until one’s message becomes crystal clear: Can you pinch an inch? Well, her teacher taught her that the first joint to the tip of her finger is about one inch. Her grasp loosens and eyes widen. There is surely more than that between her fingers.

She sinks into the sleek, black leather seat and begins to spiral as she realizes she doesn’t have the option to get liposuction like the billboard says she needs to. If it says she needs to remove her fat, then it must be bad. You don’t get rid of something that you want. That billboard’s message would continue to haunt her into her teenage years.

Fat is bad, you should never be able to pinch an inch.

The thought only progresses, and soon she associates being skinny with happiness. She can’t be happy unless she’s skinny. These thoughts began to influence the habitual things she did every day.

How many times in a week do you go in front of the mirror and check what you look like? Maybe you pull the sides of your shirt back so you can see the shape of your body. Maybe you even turn to the side in the mirror. Maybe you do both at the same time. You look to make sure your body looks the way society says it should. We worry about our hair, the blemishes on our faces, our clothes, our nails, and so much more. The list is endless, and it affects everyone — especially youth.

Middle school is an extremely formative time in a child’s life as they begin discovering who they are. Trying to navigate life is challenging enough by itself, but when children are faced with the overarching pressures of diet culture, things become even harder.

“It definitely attacks the middle schoolers a lot because they are going through so many changes, especially in that seventh-grade year. They are just trying to figure out their life, and they’re like ‘what the heck is my body doing, I don’t understand?’” said Kelly Mercer, a mental health practitioner at Noe Middle School.

Diet culture adds to that pressure by telling them they need to look a certain way. Mercer sees the effects of diet culture on many of her students.

“A lot of them will say they weigh themselves or they track how many calories they’re eating.”

Mercer is a cognitive behavioral therapist who tries to dispute her students’ ideas that calories and weight matter. She says that when they obsess over these things, they aren’t living their life to the fullest.

“They don’t have correct facts about living a healthy lifestyle, a healthy diet, and they get really obsessive.”

Mercer tries to challenge her students’ irrational beliefs about their bodies all while instilling positive mantras. As middle-schoolers enter high school, they are around a whole new group of people and pressures become even more overwhelming. Many high school students suffer from social anxiety and comparing themselves to others. A 2003 study by the National Institute of Mental Health illustrated that 31.9% of adolescents self-reported that they suffered from an anxiety disorder. A more recent 2018 study furthered these claims stating that 7.1% of adolescents had been diagnosed with anxiety by a therapist.

Just like in middle schools, diet culture is extremely prevalent in high school. Hannah Falley, a mental health counselor at Atherton High School, detailed how she witnesses the effects of diet culture.

“There are some kids that I see, it doesn’t matter if it’s one hundred and seven degrees or negative three, they are in giant hoodies, trying to cover their bodies like they are ashamed,” Falley said.

In addition to students dressing specifically to hide their bodies, Falley has witnessed students getting dizzy at school because they are starving themselves. Diet culture has taken away the ability for us to like ourselves naturally.

Falley and Mercer acknowledged that in some cases the effects of diet culture have affected something as valuable as education.

“I see a lot of kids who don’t want to do presentations, don’t want to stand up in front of the class, and kind of want to blend into the back of the classroom, and I think a lot of that has to do with body image, and not wanting to be seen by people,” Falley said.

Mercer even acknowledged the pandemics’ role in body image in schools. Kids were out of school for so long that they aren’t used to seeing other people, or having people to compare themselves to.

“The pandemic helped shine a light on a lot of these issues. All of you were stuck at home, wearing your comfy clothes and wouldn’t turn your cameras on, and now I see being back at school, the pressure to look good and feel good, is on,” Mercer said.

Students are so distracted by their battle with body image that they struggle to interact with other students and perform essential tasks to receive good grades at school.

In addition to diet culture infiltrating children’s school experience, it has also made its way into the things that we buy. Everyday people — including children and teens — go shopping and spend money buying clothes, food, services, etc. So frequently we look past how much the ideas and mindsets influenced by diet culture are prevalent in businesses and the things that we purchase.

We pay for milkshakes that are guilt-free and bread that is low calorie. We pay companies that are taking the joy out of eating. We download apps to help us keep track of what we eat, and pay for teas that give us flat stomachs. The sole purpose of many businesses is dependent upon us not liking the way that we look, and using our money to try and fix our appearance.

Eunique Gaither, a student at the University of Louisville, is getting her master’s degree in social work, gender, and sexuality studies. She took a class about diet culture in relationship to gender studies in which they discussed the portrayal of women and certain foods in commercials.

“It definitely perpetuates the idea that we have to be a certain size and eat certain things, and the whole goal is to always be smaller,” Gaither said.

Mercer, Falley, and Gaither all agree that our society needs change, but they all have different ideas regarding the major problem in diet culture.

“Diet culture is talked about so much in side comments. Stimuli brought up about a body could be detrimental. Really what sticks with people is subconscious comments.”

Falley pinpointed the most prevalent issues in diet culture as the use of social media and  comparison to others that individuals make, while Gaither mentions that we incorrectly assume everyone needs to eat equal quantities.

Gaither said we need to quit assuming that we should all eat the same things, as our bodies are built differently and need different nutrients to function properly. All of their points are extremely valid, and they are just a few of the endless problems with diet culture.

That same kid who sat in the back of the car pinching her stomach, grows up consumed by these diet culture ideas. She decides that she needs to lose weight. She thinks a change in weight will allow her to be happier, fit in better, and make more people like her. She starts by downloading an app where she tracks the calories of everything she consumes. She has a set number of calories that she can’t go over each day if she wants to lose weight.

Pulling out the scale becomes habitual, and as she buys diet food, restricts her calorie intake, and works out, her weight begins to drop. She is so excited about her success. As this goes on for a couple of weeks, she visits the doctor. That doctor’s office visit leads to a week-long stay in the hospital.

The normal heart rate for a teenager is 70-100 beats per minute, hers was 32. What she didn’t know was with all of that restricting she had been hurting her body detrimentally on the inside. She was no longer able to play sports, take walks, or travel. She was put in a wheelchair because her body couldn’t handle much movement.

Within a week after her hospital stay, she was sent across the country to an inpatient facility. She needed more support than her home could offer. She was away from her family for six weeks, in hope of getting the help she needed.

The girl that all of this happened to was me. I was the one who was diet culture infected. I was the one who got caught up in the idea that I wasn’t good enough. When trying to make myself happier, I became the saddest that I had ever been in my life. The ideas embedded within our culture caused so much pain for me and my family.

I share all of these insights and a piece of my story not to make people feel sorry, but to bring attention to a virus within our culture that is often not put in the spotlight. This virus isn’t unbeatable though, we can help cure it as a society. We need to start changing the way that we view ourselves, and embrace our bodies the way they are. We need to come to the individual revelation that we are all built differently, and it is impossible for all of us to have the same body structure, weigh the same, or eat the same things. Remember that all of those ads and commercials promoting diet culture are put out there by companies in order to make a profit, not for our well-being.

In commercials and magazines, we need to see more than one body type. Put an end to diet culture so that in future generations all of those little kids sitting in the back of their parent’s cars are holding toys in their hands, not their stomachs. Kids are supposed to enjoy the moment, not be caught up in a culture that breaks them down instead of building them up.